Changing human behaviour for the better is a hard task often poorly executed. Most appeals for change are directed at our better nature and the changes are thus done on "hard mode". I'm in favour of capitalising on the cheap, short termist "easy mode" approach. Let's leverage our vices to make a better world!

Over the past few months I've worked to make meditation a regular habit. I selected the Waking Up app produced by Sam Harris[1] to help me in that effort. There is a 50-day "getting started" course which I completed in June 2020. Once complete you can either start a new course, or follow a daily meditation. I chose daily meditations.

My partner started meditating a few weeks before me using another app. One day in May during our morning walk she told me that she'd broken her meditation streak and felt a bit sad. I looked around the Waking Up app and saw that I too had a streak counter and was on about a 20 day streak at the time. For the next few weeks our streaks were the centre of a friendly competition between us. We'd encourage each other to continue the habit and to not break our respective streaks.

One morning in late July I finished my meditation and spent a few seconds looking for my streak count. I couldn't find it. I figured it was a change in the UI and that it had moved somewhere else in the app. A little while later Sam sent an update informing me that streaks had been removed. There was also a talk in the app called Spiritual Materialism which explained why this was done. 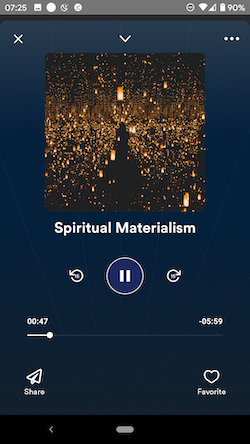 "I think I'm much more humble than you would understand" #

Part of the reasoning given for removing streaks was that it was: "... possible to take pride in one's humility." If the truth be told the change made sense to me, it articulated a shortcoming in myself I hadn't yet noticed. I continued meditating, prompted by the app's helpful daily reminders each morning. Over time though, I found myself ignoring the reminders in the morning and putting off meditation until later... Eventually the reminders started to stack up and when the guilt became too much I would swipe them all away. 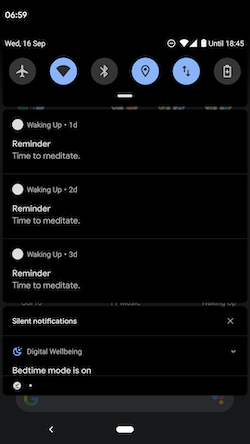 In the Spiritual Materialism episode Sam says "you don't need this crutch." When I heard that I agreed enthusiastically. After only a couple of months of meditating each day I was confident I had the habit nailed. It's now September and I realise I've not meditated for a few weeks. I miss the streak, even though it used my pride as motivation, it helped me become better.

If you look around today, you'll see that pride is much more kinetic than good intentions. On the 1st of January each year millions of people set out to eat better, workout more, and read more. The intention is there, but the follow through is hard. We imagine our future selves as more able to suffer through the process of becoming better. The reality is that our future selves are no different to our present selves. Have you managed to go to the gym 3x a week for the last few months? If not, chances are you'll struggle to do that for the next 3 months. You need more than good intentions[2].

An approach used to supplement good intentions is guilt. Guilt doesn't work though, people find the feeling uncomfortable and move away from it. For example, a good natured person will cross the road to avoid having to say "I've got no change" to a homeless person. To my shame I do this too while justifications run through my mind: "I only carry cards", etc. In a similar act of ego preservation I swipe away my guilt-inducing meditation notifications. 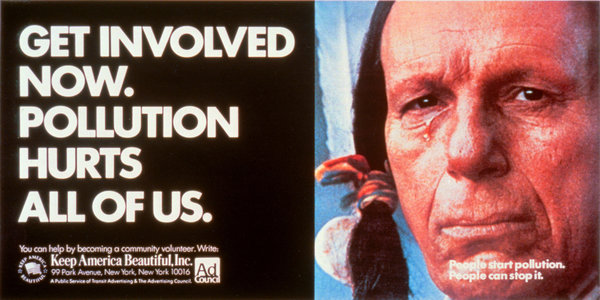 Of course not everyone reacts to guilt in quite the same way. Some people relish in moving counter to guilt. See for example the climate change deniers that make their SUV's more carbon intensive[3]. The solution to problems like climate change cannot be weaponising guilt, it doesn't work. Similarly, guilt fails when we to use it to build or break habits.

We've got to make doing the right thing appeal to our vices. We've seen smoking rates drop (partly) because it's become uncool. Similarly, Tesla cars are a status symbol. People want to fulfil their prideful ambitions and buy one. The benefits the car has for climate change can be a distant afterthought. Let's find a way to do the same thing for single-use plastics, for palm oil and meditation. We must use our vices as tools to improve ourselves and the world around us[4]. We must do this until it is no longer necessary, until our virtues can take over.

In conclusion, Sam, I really need the streaks feature back... my partner is winning.